Texting And Driving: A Deadly Combination 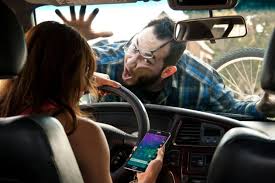 A black BMW rockets down I-95 in South Florida at more than 80 mph. Inside, the driver looks down at his smartphone, his thumb moving wildly over the screen. The highway is crowded, the driver is dangerously close to the car in front of him, and cars are changing lanes all around him. And this, sadly, is not an isolated case. I often travel this busy 100 mile corridor of I-95, and every time I do, I see at least one person texting and driving at high speeds.

To put some perspective on how dangerous this is, the National Highway Traffic Safety Administration (NHTSA) states that sending or receiving a text takes a driver’s eyes off the road for an average of 4.6 seconds. In that 4.6 seconds, a car traveling at 80 mph will travel 1/10 of a mile like an unguided missile. Since crashes happen within an average of only 3 seconds of distraction, you can see how each 4.6 second texting event is an invitation to disaster. This explains why you are more than 23 times more likely to be involved in an accident while sending or receiving a text message. Despite this danger, in 2015, the NHTSA reported that people were texting and driving 660,000 times every day. And, while it is bad enough to see drivers doing it on local roads, seeing people texting and driving at high speeds simply defies logic.

The NHTSA reports that 3,477 people died from “distracted driving” in 2015. That is almost ten dead people every day; gone forever and not coming back. And for what? If we could see the texting or social media activity that caused the death, would we see anything that could possibly justify the loss of life? Surely not. What we would see is meaningless and unnecessary chatter that would further highlight the utter waste of lives caused by this reckless behavior.

Texting And Driving – An Unacceptable Epidemic

Texting while driving does not cause as many deaths each year as the flu does, but, in at least one way, these deaths are more tragic. Because, while we don’t have the ability to prevent every flu death, every person who dies in a texting-related accident could be spared. All it takes to stop this epidemic is common sense and restraint. Because these deaths are so easily preventable, even one death is intolerable and inexcusable. So why are people still dying? Why do we seem incapable of resisting this dangerous behavior?

Is it Ignorance or Arrogance?

Dr. David Greenfield is the founder of The Center for Internet and Technology Addiction. He has done research work with AT&T in conjunction with their It Can Wait campaign against texting while driving. Results of a 2014 survey of drivers who own cellphones and text underscore what Dr. Greenfield refers to as a discrepancy between people’s attitudes and their behaviors. In other words, people will say they believe something, even as their actions contradict that belief.

For example, although 98% of the survey respondents agreed that texting and driving is dangerous, 75% of those same people still admitted that they do it anyway. And, while the survey respondents were certainly old enough to be able to resist the urge for instant gratification, 28% of them admitted that they feel compelled to immediately view or respond to a text, for fear of missing out.  More troubling still, 25% simply believe that texting behind the wheel does not negatively affect their ability to safely drive. Those people might want to talk with Reggie Shaw.

A Moment of Distraction – A Lifetime of Guilt

In 2006, at age 19, Reggie Shaw was texting and driving when he caused an accident that ended two lives. To Reggie, using the phone while driving was just part of driving. He did it all the time, without giving it a thought. In fact, he says he never realized it was dangerous. 12 years after the accident, Reggie says he struggles every day with the knowledge that he caused two deaths. He will carry that guilt for the rest of his life. So, it is important to remember that it is not just our own lives being risked when we text while driving, it is the lives of everyone who shares the road with us at any given time. It is shocking how many people are willing to gamble with other people’s lives, in order to post something to Facebook or send a text message. Take it from Reggie (and thousands of others like him): There is no post that cannot wait, and no text message that is equal to a human life.

It is Not Just Texting and Driving

Are you feeling proud of yourself right now because you only talk on the phone while driving, but you never text? Not so fast! Any cell phone use (including hands-free talking or voice-dictated texting) is a driving distraction that is linked to increases in car accidents and fatalities. You may think that you are paying just as close attention to the road while on a hands-free call as you otherwise would, but the data tells a different story. Your brain is just as distracted during a hands-free call as it is when holding the phone in your hand. And, talking on a cell phone while driving is not the same as talking to a passenger.

The University of Utah did research on this subject, led by Professor of Psychology David Strayer. They found that when speaking with passengers, drivers adjust their conversations according to the driving conditions. They either pause the conversation temporarily or point out the obstacle to the passengers. In addition, the passengers tend to participate in adjusting the conversation, as they, too, see the conditions ahead. So don’t be fooled into believing that all conversations in the car are created equal. They are not. Speak to people who are in the car. Don’t speak to people who are not. Because, as Dr Strayer points out, “In terms of risk, you’re as likely to be in an accident talking on the cell phone as you are if you are legally drunk.”

Let’s Put a Stop to it Now

Life is fragile. There are so many dangers in the world that we just cannot control. Texting while driving isn’t one of those. We can control this, and we must. We can, with 100% certainty, begin saving lives today. It doesn’t take big money to do it, nor does it take extraordinary intelligence. It doesn’t even require a commitment of time or effort. All it takes is ordinary discipline and self-control. There is no excuse. When we are behind the wheel, let’s imagine we are back in the days before cell phones. Let’s go back to the time when we only made or received calls from home or work. When you get in the car, put the phone away. Turn on some music, be alone with your thoughts, and enjoy a little “me time.” You might just find that you like it. And, you might just save a life.